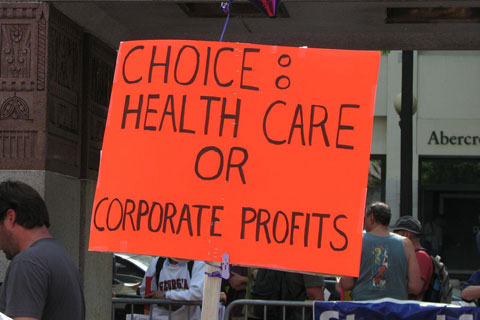 Democrats seized the House while Republicans increased their majority in the Senate, but the unambiguous and across-the-board winner in the election was regulation – specifically, regulation of the health insurance industry.

Rarely has the public sent such a clear message that it wanted government to rein in corporations and market forces in favor of consumer and public interest protections. The desire to retain provisions of the Affordable Care Act protecting those with pre-existing conditions was key to Democratic gains. Republicans responded by pretending they agreed with that principle, but few were fooled by this deception.

At the same time, voters in three deep red states – Idaho, Nebraska and Utah – approved ballot initiatives in favor of ACA Medicaid expansion. This amounted to an embrace not just of regulation but of out-and-out government-controlled health coverage.

All these results should put an end to the longstanding Republican crusade to repeal the ACA, but it remains to be seen whether there is also a termination of the Trump Administration’s effort to undermine the law through steps such as allowing wider sale of substandard policies.

One encouraging sign came even before the votes were counted. On November 2 a federal judge in Miami, acting at the request of the Federal Trade Commission, issued an order temporarily shutting down a Florida company called Simple Health Plans LLC, which along with related firms was selling policies the FTC called “predatory” and “worthless.”

The FTC complaint against the companies spells out a variety of deceptive practices meant to make customers think they were buying real coverage when in fact they were getting medical discount memberships of limited value.

It’s telling that one of the websites used by the firms is called Trumpcarequotes.com. Trumpcare is actually an appropriate term for the crappy coverage—both because Trump has been touting such plans and because the Trump name has been involved in previous scams such as Trump University. Let’s not forget that after his election Trump had to pay $25 million to settle litigation related to that venture, a step that the New York State Attorney General called “a major victory for the over 6,000 victims of his fraudulent university.”

The ACA’s provisions relating to protection for pre-existing conditions are inseparable from those setting minimum standards for coverage. Ensuring the right of patients to buy insurance is meaningless if they end up with plans that pay for next to nothing.

The proliferation of junk insurance through the efforts of companies such as Aetna was one of the dismal realities of the U.S. health insurance market that gave rise to the ACA. Republicans have been promoting similar low-cost plans as their solution to the supposed crisis of Obamacare. This is a cynical ploy to use a perverse form of consumerism to restore the old days of limited regulation. Let’s hope the election results have taught them a lesson about the consequences of messing with healthcare.