Violation Tracker collects data on enforcement activity by more than 40 federal regulatory agencies and the Justice Department. Missing from the list is the Bureau of Alcohol, Tobacco, Firearms and Explosives.

The database provides penalty totals for about 50 major industry groups. High on the list are controversial industries frequently involved in misconduct: banks, oil companies, pharmaceutical producers and the like. Missing from the list is the gun industry.

The ATF and the gun manufacturers are not being deliberately excluded from the database. The problem is that, unlike other federal agencies claiming to be involved in industry oversight, ATF has surprisingly little to report on its efforts. I’ve searched the ATF web pages thoroughly and cannot find the kind of information typically found on other agency sites on proceedings against companies for regulatory infractions. I’ve also searched the archive of the Government Accountability Office for reports about the agency’s enforcement actions against gun makers and gun sellers, to no avail.

ATF’s website has a statistical report on the gun industry and a list of rulings that appear to deal with general policy issues, including licensing, rather than individual company behavior. There is also a page pointing to the relevant provisions of the Code of Federal Regulations but the word “enforcement” hardly appears on the website, except for references to the law enforcement community.

The light touch of the federal government is also reflected in the SEC filings of publicly traded gun manufacturers. For example, the recently published 10-K annual report of Sturm, Ruger & Company has one perfunctory reference to ATF and gives the impression the agency is not much of a concern.

Gun manufacturers are, of course, subject to broad federal regulation covering all industries. Companies such as American Outdoors Brands (parent of Smith & Wesson), Beretta and Colt’s Manufacturing as well as Sturm, Ruger appear in Violation Tracker in connection with the penalties that have been imposed on them by agencies such as the EPA and OSHA. Smith & Wesson has an entry relating to a $2 million penalty imposed by the SEC for violating the Foreign Corrupt Practices Act. American Outdoor Brands and Sturm, Ruger have been penalized by the Commerce Department’s Bureau of Industry and Security for export violations.

Yet, aside from licensing requirements, the gun business is lacking significant industry-specific oversight relating to issues such as safety like that exercised by agencies such as the Food and Drug Administration or the Federal Railroad Administration. Special legislation has provided extraordinary protection to an industry whose products are so lethal.

The reality has just come to light in connection with President Trump’s statement that he ordered Attorney General Sessions to get ATF to find a way to restrict the bump stock accessory that allows semi-automatic weapons to function like illegal machine guns. But it appears ATF may not have the authority to take such action.

In truth, the ATF is a licensing body but not really an enforcement agency. The gun industry is essentially unregulated, and the National Rifle Association continues doing everything in its power to keep it that way.

It’s unclear to what extent the Obama Administration’s practice of extracting unprecedented monetary penalties on miscreant companies proved to be an effective deterrent, but at least the billion-dollar fines and settlements served to highlight the ongoing problem of corporate crime.

The Trump Administration seems to be a lot less interested in cracking down on the most egregious corporate offenders. Although the enforcement arms of agencies such as OSHA and EPA are still operating along normal lines, there has been a sharp decline in the number of mega-penalty cases announced by the Justice Department.

This conclusion emerges from an analysis of the data recently added to the Violation Tracker database covering cases through the end of the Trump Administration’s first year in office on January 19.

Since the largest penalties are normally imposed on the largest corporations, I did an analysis focusing on the Fortune 100 list of the very largest U.S. publicly traded companies. I found that overall federal penalties imposed on these firms during Trump’s first 12 months totaled $1.1 billion, compared to an annual average of more than $17 billion during the Obama years.

Those financial services sector settlements peaked during the middle years of the Obama era. Yet Trump’s $1.1 billion first-year total is still far below the annual average of more than $9 billion for the Fortune 100 during Obama’s final two years in office. It also trails behind the $3 billion total during Obama’s first year.

Looking at all corporate offenders, there were 44 cases with penalties of $1 billion or more during the Obama era yet only two during Trump’s first year, and he doesn’t really deserve credit for those. One is the $5.5 billion settlement reached by the Federal Housing Finance Agency with the Royal Bank of Scotland relating to the sale of toxic securities to Fannie Mae and Freddie Mac. That case had been filed in 2008, and the settlement had been negotiated under Obama. The other is the a $1.4 billion penalty against Volkswagen for its emissions cheating that appears in EPA records with a date of May 17, 2017 but was actually part of a larger $4.3 billion settlement announced by the Justice Department during the last days of the Obama Administration.

There is also an interesting pattern among Trump Administration penalties in the next tier down—those of $100 million or more. The parent companies involved in about two-thirds of these cases are foreign, especially those with the largest penalty totals. They include the Chinese telecom company ZTE, which was penalized for export control violations, and the Swedish telecom Telia, which was punished under the Foreign Corrupt Practices Act.

It appears that the Trump Administration is more likely to get tough with a corporate violator if the company is not based in the United States, while domestic companies get treated more leniently. I guess the slogan is: Make Domestic Corporate Criminals Great Again.

Note: you can do analyses of your own on Violation Tracker using our new feature allowing search results to be filtered by presidential administration. 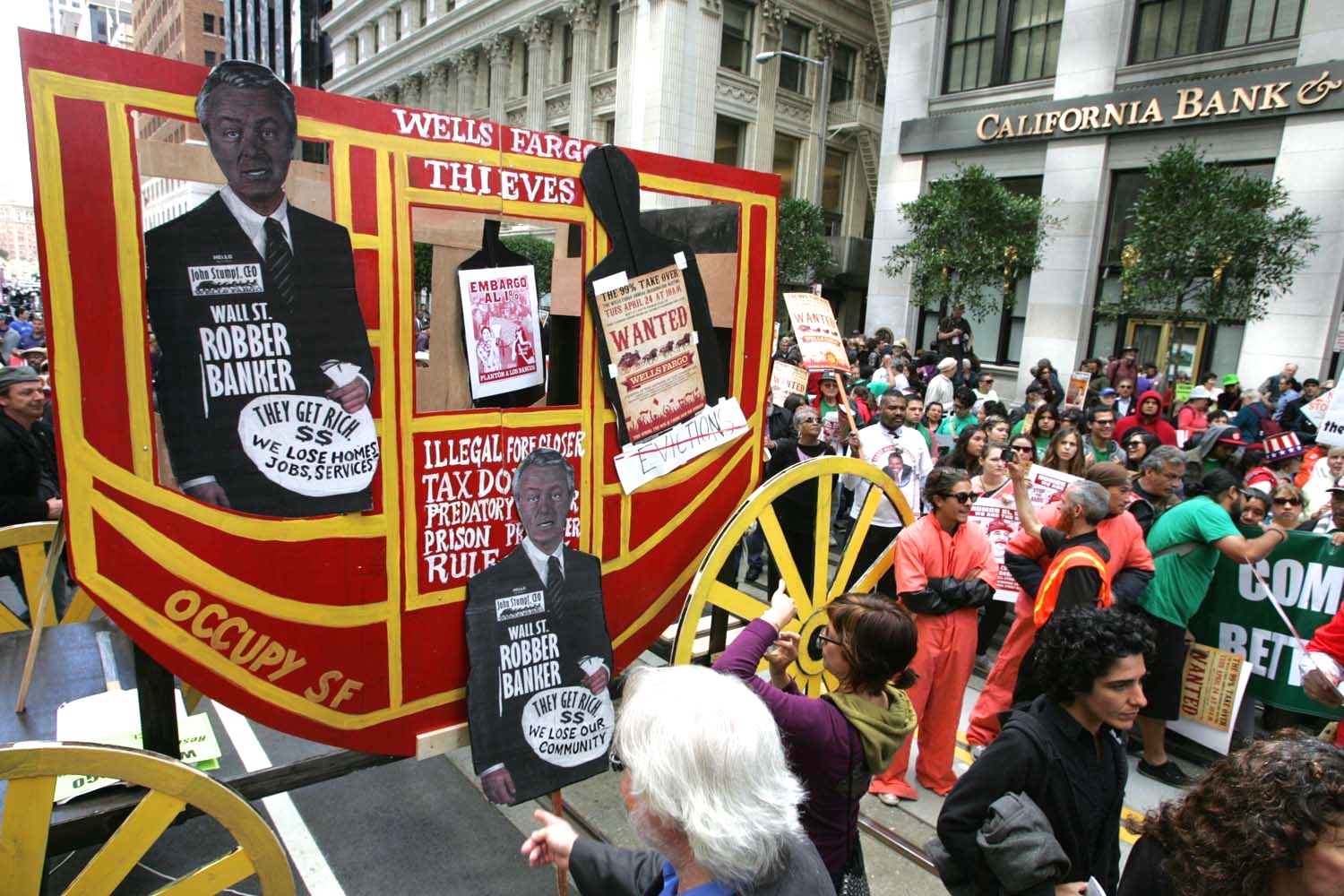 The federal response to corporate misconduct over the past two decades has alternated between tougher monetary penalties and the promotion of voluntary measures to lure companies into behaving better. Neither has worked very well.

Companies came to saw the increased fines as a tolerable cost of doing business (especially when they were tax deductible), while voluntarism was never a match for corporate greed.

It was thus intriguing when the Federal Reserve recently adopted a new approach in dealing with Wells Fargo. That bank, of course, has become notorious for its brazen scheme of creating millions of accounts not requested by customers, in order to generate illicit fees. It paid a fine of $100 million, with a lot more expected to follow. This came after a series of other scandals, including mortgage abuses that resulted in a $5.3 billion settlement in 2012.

The Fed, on Chair Janet Yellen’s final working day in office, issued an unusually blunt press release saying that the board was taking steps in response to “widespread consumer abuses and other compliance breakdowns” at Wells.

In an unprecedented step, the Fed imposed a restriction on the bank’s ability to grow “until it sufficiently improves its governance and controls.” In an industry for which getting larger is the guiding principle, Wells will feel intense pressure to satisfy the Fed’s demands. In fact, concurrently with the Fed’s action Wells announced that it would replace one-quarter of its 16-person board of directors by the end of the year.

Bank-friendly politicians have not had much to say about the Fed’s action, but it is clear that the restriction placed on Wells represents a forceful rebuttal to those pressing for a weakening of financial industry regulation. The ouster of Yellen by President Trump was a coup for the deregulation crowd, but we can take some solace in reports that her successor Jerome Powell oversaw the Fed’s negotiations with Wells.

The Fed’s action should be promoted as an example of how regulatory agencies and the Justice Department need to get more creative in dealing with egregious and repeat violators. Rogue corporations will only change their behavior if the penalties really sting.

The restriction on growth begins to meet this requirement because it makes Wells more vulnerable. An inability to become larger through acquisitions means that the bank will lose ground to its big competitors. Wells is probably too big to be a potential takeover target itself, but it could come under pressure from activist investors to restructure or even sell off portions of itself.

Moreover, the restrictions will probably depress the bank’s stock price, and that will be felt personally by the executives who encouraged or overlooked the misconduct.

At the same time, the house-cleaning among directors is an important message to send to board members at other misbehaving companies. That message would be even more effective if directors are not just removed but held personally liable for allowing the corrupt practices to happen.

The Fed has not always been the most aggressive of regulators. Let’s hope its action on Wells inspires other agencies to get tougher with corporate miscreants.

Donald Trump built his presidential campaign on the claim that he would be a champion for working people, yet his administration finds one way after another to tip the scales in favor of employers. The latest example involves tips themselves.

In December the Labor Department, bowing to the wishes of the National Restaurant Association, proposed to rescind an Obama Administration rule that prohibited employers from pooling tips. The rule had been adopted to prevent restaurant owners from claiming a share of the gratuities.

While the DOL has claimed that the change would benefit back-of-house workers who don’t directly receive tips, groups such as Restaurant Opportunities Centers (ROC) United say that employers often grab a portion of tips when it is not permitted and that legalizing the practice will only encourage owners to take more.

It turns out that ROC United’s position is shared but some at DOL, but those views are being suppressed. Bloomberg has just reported that political officials at the department rejected an internal analysis concluding that workers could lose billions of dollars from tip pooling. DOL sources told Bloomberg that the officials ordered staffers to change their methodology to reach a different conclusion.

Anyone who takes an honest look at the restaurant industry is bound to conclude that employers will do their utmost to exploit tip pooling. After all, these are companies that already steal from their workers through violations of wage and hour rules concerning off-the-clock work, overtime, misclassification and the like.

Consider the large full-service chains such as Darden Restaurants (Olive Garden, Capital Grille and other brands), Brinker International (Chili’s and Maggiano’s), Bloomin’ Brands (Outback Steakhouse and others) and DineEquity (Applebee’s and IHOP). As shown in Violation Tracker, each one of these has had to pay fines to the DOL’s Wage and Hour Division; six times in the case of DineEquity.

The chains have also been targeted in private collective action lawsuits brought by groups of workers. In 2007 Darden agreed to pay $11 million to settle a group of suits alleging that the company improperly classified certain types of workers as exempt from overtime pay eligibility.

In 2014 Brinker International agreed to pay $56.5 million to settle a long-running lawsuit alleging that the company had routinely violated California rules about meal and rest breaks. In 2016 Bloomin’ Brands agreed to pay $3 million to settle allegations that workers at its Outback outlets were required to show up early to perform unpaid pre-shift prep work. DineEquity has faced similar litigation.

Why would anyone think that companies involved in such transgressions would pass up another opportunity to enrich themselves if DOL gives a green light to tip pooling?