It’s common for governors to stage publicity events to announce major job-creating investments in their state. This allows them to take implicit credit for a project that was probably helped along with tax breaks and other financial giveaways.

When it came to the Taiwanese company Foxconn’s plan to build a $10 billion flat-screen plant in Wisconsin, the hype was taken to a new level. Gov. Scott Walker and Foxconn’s Chairman Terry Gou made the announcement not at the state capitol but at the White House, where they were joined by President Trump, Vice President Pence, Speaker Paul Ryan and a host of other high-level officials of the federal government.

As you might expect, the event quickly turned into a celebration of the Trump Administration. Walker, Pence and Ryan, in whose Congressional district the massive plant is to be sited, gushed about Trump’s economic leadership, with Pence declaring: “Under President Donald Trump, America is back.”

That apparently was not enough for Trump, who found it necessary to celebrate himself even more. Referring to Gou, the President declared: “If I didn’t get elected, he definitely would not be spending $10 billion” in the United States.

The creation of numerous new manufacturing jobs is something that will be welcomed by the working people of Wisconsin, but there are reasons, beyond Trump’s political exploitation of the deal, to remain suspicious.

The first matter of concern is the company itself. Foxconn has a long history of abusive labor practices in its overseas plants, including those used to supply Apple. Conditions in the company’s Chinese plants were so bad that in 2010 there was a rash of suicides among overworked employees. The company installed nets on its plants to discourage workers from jumping to their deaths. Foxconn later claimed to improve its labor conditions but the company is far from a high-road employer.

Then there are the claims about the terms of the Wisconsin deal. Gov. Walker claimed that the plant would directly create 13,000 jobs. That was good for generating excitement, but it is a dubious figure. Manufacturing establishments no longer employ anything close to that number of workers.

Out of curiosity, I checked with the Bureau of Labor Statistics to see how many plants currently exist with 10,000 or more workers. It turns out the BLS does not have that information because, as an analyst told me, there are so few facilities of that size. The trend, of course, is toward higher levels of automation and much smaller workforces.

Then there’s the issue of who is paying for the plant. While Trump and the others praised the deal as an example of private sector vitality, Foxconn’s plant will be underwritten in large part by the taxpayers of Wisconsin. Walker said that the state would “invest” $3 billion in the project. That would be the fourth largest economic development subsidy package ever offered by a state.

Despite the promises of public officials, extravagant subsidies rarely provide economic benefits equal to the loss of tax revenue. Wisconsin has a particularly bad record in this regard. The Walker Administration and its privatized economic development agency have been at the center of a long string of controversies about cronyism and poor job-creation outcomes.

The Foxconn deal will provide political benefits for Walker, Ryan and Trump, but it is unclear how much good it will actually do for the people of Wisconsin.

When Betsy DeVos  was nominated to head the Department of Education, the main concern was what harm a “choice” crusader would bring to K-12 public schools. Recently we’ve seen that she can also cause damage with regard to post-secondary education.

DeVos announced plans to delay the implementation of rules on for-profit colleges that the Obama Administration fought long and hard to bring into being. Calling the plan unfair, DeVos said she wants to redo the rulemaking process from scratch – a clear sign that she wants to weaken or eliminate the restrictions.  That’s the premise of a lawsuit just filed against DeVos by the attorneys general of 18 states and the District of Columbia.

The Obama campaign against predatory colleges was one of the most consequential initiatives of the administration on corporate misconduct. In addition to the rules – one of which is designed to bar federal loans at schools whose graduates don’t earn enough to pay off their debt and another that would make it easier to erase debt incurred at bogus institutions – the Obama Education Department and the Consumer Financial Protection Bureau brought enforcement actions that helped bring about the demise of flagrant abusers such as Corinthian Colleges and ITT Educational Services.

And this came after the Obama Administration pushed Congress to get commercial banks out of the student loan business.

Taken together, the Obama era measures against predatory for-profit education represent one of the rare instances in which government action targeted not just an illegitimate practice or a miscreant company but an entire industry. The message was not simply that for-profit colleges needed to be reformed but rather that they should not continue to exist. It was capital punishment for capital.

It comes as no surprise that the billionaire DeVos, who has had personal involvement with dubious business ventures, is seeking to undo the crackdown on for-profit colleges. And it is yet another example of how the Trump Administration is working against the interests of those lower-income voters who put him in office.

The same dynamic can be seen in the healthcare arena. The Republican “solution” to the problems of the Affordable Care Act is to make it easier for insurance companies to offer bare-bones junk insurance while dismantling Medicaid, both in its traditional form and its expansion under the ACA. The latest version of the Senate bill is willing to retain the hated taxes on high-income earners as long as the assault on the socialistic Medicaid program moves forward.

It appears that the right’s desire to protect the interests of corporations – including the most predatory – is even greater than its wish to redistribute income upward. Thus the one thing that Republicans have made sure to do with their stranglehold on the federal government has been to roll back as many business regulations as possible.

It remains to be seen how long Trump and Congressional Republicans can get away with telling their working class supporters that predatory corporations are the ones that deserve relief. 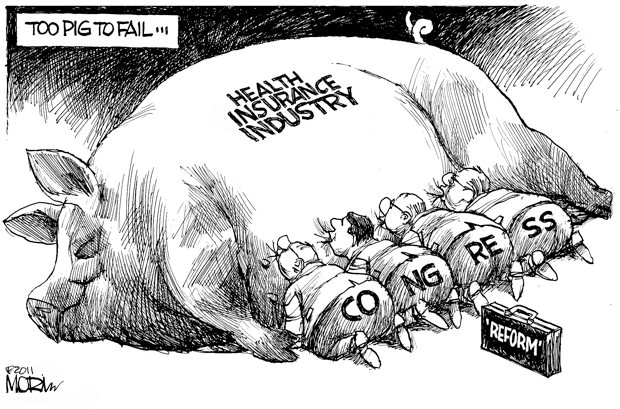 Many voices are speaking out about the Republican effort to undo the Affordable Care Act, but one party diligently refrains from public comment: the insurance industry. While the industry is undoubtedly exerting its influence in the closed-door negotiations to restructure the wildly unpopular GOP bill, it is not airing those views more widely.

It doesn’t have to, because the healthcare debate between the two major parties is largely a disagreement on how best to serve the needs of Aetna, Anthem and the other big players.

The ACA, of course, was built on the premise that government should expand coverage largely by providing subsidies to help the uninsured purchase plans from private companies. When those companies became dissatisfied with the composition of their new client base and starting jacking up premiums in response, ACA supporters were put in the position of advocating for new insurer financial incentives.

Meanwhile, the Republicans are seeking to help the industry by rolling back Medicaid expansion and allowing it to return to the pre-Obamacare practice of selling bare-bones junk insurance, which would be the only kind that many people could afford after subsidies are decimated.

This is probably a no-lose situation for the insurers: either they get paid more to provide decent coverage or they are freed to sell highly profitable lousy plans.

The industry’s unethical practices are not limited to the individual marketplace. The big insurers have also exploited the decision by policymakers to give them a foothold in the big federally funded programs: Medicaid and Medicare.

As Senate Republicans were cooking up their repeal and replace bill, the U.S. Attorney’s Office in Los Angeles joined two cases against one of the industry’s giants, UnitedHealth Group. The whistleblower suits accuse the company of systematically overcharging the federal government for services provided under the Medicare Advantage Program.

The complaints in the cases allege that UnitedHealth routinely scoured millions of medical records, searching for data it could use to make patients seem sicker than they actually were and thus justify bigger payments for the company, which was also accused of failing to correct invalid diagnoses made by providers. Either way, the complaints argue, UnitedHealth was bilking Medicare Advantage, which was created on the assumption that bringing the private sector into a government program would cut costs.

Such assumptions continue to afflict federal health policy as a whole. Too many members of Congress continue to worship the market in the face of all the evidence that the private insurance industry cannot be the foundation of a humane healthcare system.