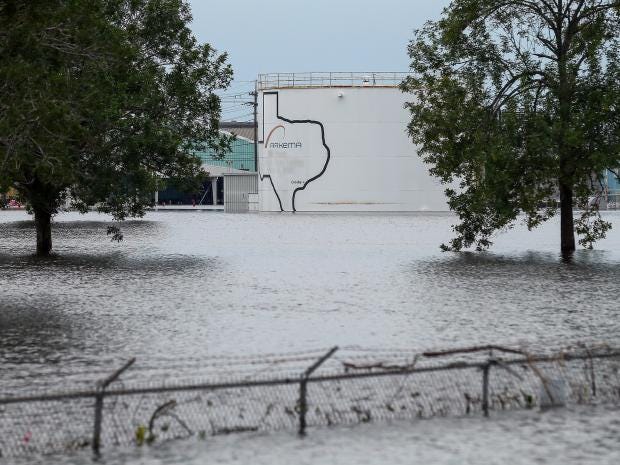 Much of the Gulf region remains flooded, people are still being rescued, and the full magnitude of the damage is not yet known. But soon the center of attention will be the rebuilding effort and how to pay for it.

Texas Gov. Greg Abbott is talking about the need for a federal aid package well in excess of $100 billion. Whatever the amount turns out to be, the critical issue will be how the money is distributed.

It’s already clear that the petrochemical facilities clustered in southeastern Texas have been hard hit by the flooding, and there will no doubt be calls to use both federal and state financial resources to help repair these plants.

While there should be no hesitation about using public funds to help the people of the Gulf rebuild their lives, we shouldn’t automatically do the same for the petro giants.

The first reason is that these companies can well afford to rebuild on their own dime. Exxon Mobil, which owns the giant refinery in Baytown, earned more than $130 billion in profits during the past five years. The Motiva refinery in Port Arthur, another massive facility, is owned by Aramco, which in turn is owned by the fabulously wealthy government of Saudi Arabia.

Second, taxpayers made enormous financial contributions to the construction and operation of these facilities. As shown in Subsidy Tracker, the Motiva refinery was awarded a $257 million state and local subsidy package in 2006 to help underwrite its expansion. Earlier this year, Exxon and SABIC, another Saudi company, were granted a $460 million package to jointly build a petrochemical plant near Corpus Christi.

Apart from being subsidized, many of the Gulf region’s petrochemical plants have horrible compliance records regarding toxic emissions and worker safety. The most notorious example is the refinery in Texas City between Houston and Galveston that was previously owned by BP and subsequently sold to Marathon Petroleum. In the wake of a 2005 explosion at the facility that killed 15 workers, BP was fined a then record amount of $21 million by OSHA for a pattern of egregious safety violations in Texas City. The company failed to make the necessary corrections and was later hit with an even larger penalty. BP also had to pay nearly $180 million to settle a federal environmental case involving the refinery.

As shown in Violation Tracker, in 2013 Shell Oil had to pay more than $117 million to resolve Clean Air Act violations at its Deer Park refinery outside Houston. The chemical plant in Crosby, Texas owned by the French company Arkema, where flooding has caused explosions, was fined $107,918 earlier this year by OSHA for serious safety violations (company later negotiated a reduction down to $91,724).

Providing more subsidies for these facilities would in effect negate the impact of the penalties the corporations paid for their negligence.

Finally, there is the difficult question of whether all these facilities should be rebuilt at all, especially if taxpayer funds are involved. The Gulf refineries play a significant role in an energy system that exacerbates the climate crisis, which likely contributed to the intensity of Harvey. We may not be free of fossil fuels yet, but does it make sense to use public resources to prolong the life of facilities linked to extreme weather events that threaten our future?