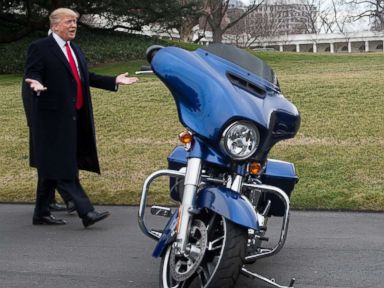 Donald Trump seems to live in a world in which there is global trade but no foreign direct investment. He recently denounced BMW imports at a South Carolina rally while ignoring the German automaker’s production facility a short distance away in Spartanburg, which has been in operation since 1994.

The president also seems to be less than fully informed when it comes to the foreign operations of U.S. corporations. He has been berating Harley-Davidson for announcing plans to shift some production to Europe to circumvent the tariffs the EU is imposing on selected American products in response to Trump’s trade policies. In his tweet tirade, Trump demand that Harleys “never be built in another country—never.”

In fact, Harley already has offshore production facilities. One of those is in India, which was originally announced in connection with President Obama’s November 2010 trip to that country to promote U.S. commercial interests. Republicans denounced the trip, not because of job offshoring but rather because of exaggerated reports of the cost of the delegation.

Harley initially used the Indian operation to assemble bikes shipped in knocked-down form from U.S. plants, but later it began using locally produced components. In 2012 Harley outsourced much of its IT work to the Indian company Infosys, some of whose employees on the account worked in the U.S. There were reports in 2014 that Harley IT workers were being asked to train Infosys employees on H-1B visas who were replacing them.

The company also has an assembly facility in Brazil and a manufacturing plant in Australia that produces high-finish wheels. In its 10-K filing Harley states: “The motorcycles assembled at the Company’s international facilities have the same authentic look, sound, feel and quality of a motorcycle manufactured by the Company’s U.S. facilities.” Moreover, Harley announced earlier this year that it is shifting some production from a plant in Kansas City to one in Thailand.

The Harley situation is just the latest in a series of tiffs between Trump and large corporations in which it is difficult to support either side. Harley certainly needed to be called out for engaging in more and more offshore outsourcing while continuing to promote an all-American image.

Trump’s criticism of the company, however, is far from coherent. It seems to be based mostly on his feeling that he was personally betrayed by a firm that he touted as a symbol of American greatness. Trump seems to have picked a fight with Harley in the same way he has gone after other companies, starting with Carrier soon after his election. He has done so mainly to burnish has own tough-guy image while in the end failing to extract any real concessions. The same goes for is supposed battles with pharmaceutical producers, aerospace manufacturers, automakers and others.

Trump’s objective is to give the impression he is taking a hard line against big business, while he is actually catering to every desire of corporate America when it comes to regulation and taxes. It is the flip side of his posture toward workers, in which he pretends to be their defender but is in reality undermining employment safeguards and labor rights. How long can the skullduggery continue?