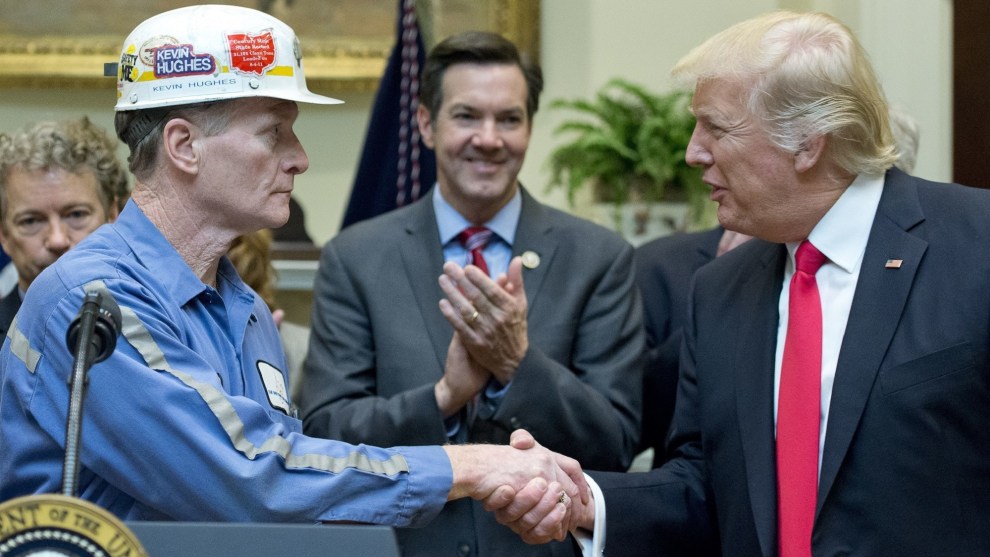 Donald Trump’s blue-collar supporters may like what they are seeing on Fox News, but when they arrive at work the MAGA revolution is nowhere to be found. Far from empowering labor, the Trump Administration’s employment policies are heavily skewed toward management.

The aspect of this I’ve been focusing on lately are wage and hour issues. Recently my colleagues and I at the Corporate Research Project and Jobs With Justice published Grand Theft Paycheck, a detailed look at wage theft by large corporations. We found that major employers in a wide range of industries continue to pay out large sums in collective action lawsuits, which indicates that they continue to violate the Fair Labor Standards Act by compelling employees to do off-the-clock work and denying them proper overtime pay.

Such litigation may soon be a thing of the past. There are signs that collective actions are failing in the wake of the U.S. Supreme Court’s Epic Systems ruling, written by Trump nominee Neil Gorsuch, affirming the right of employers to use mandatory arbitration to block group lawsuits. For example, a federal judge in California told a group of Domino’s Pizza drivers that they had to use arbitration rather than litigation to resolve their claims against franchise owners.

At the same time, instead of intensifying enforcement by the Wage and Hour Division, Trump’s Labor Department is promoting a new approach based on corporate self-audits and fewer fines. Allowing employers to operate on the honor system is just another way of weakening enforcement.

A new report from the National Employment Law Project shows that the Trump DOL is also reducing enforcement of workplace safety and health rules.  NELP found that OSHA enforcement activity in FY2017 was down compared to the previous year. The decline was even more pronounced during the first five months of FY2018, when the number of enforcement units (the measure used by OSHA) fell by more than 7 percent. This trend is likely to worsen, since NELP notes that the number of OSHA inspectors has been declining.

Federal workers are facing an assault of their own. Trump recently announced plans to overhaul rules affecting more than two million employees, making it easier to discipline and fire them. The move also includes an attack on federal unions through stricter limits on the amount of time grievance officers and other activists can spend on union activity during working hours.

The next blow will come in the Supreme Court, which is expected to issue a decision soon in the Janus case that blocks the ability of public sector unions to collect fees from employees who decline to join but still benefit from collective bargaining agreements and other protections negotiated by those unions. Such a ruling could have a devastating financial impact on public unions.

As bad as all this sounds, it could boomerang on Trump and his corporate allies. More workers may follow the example of the teacher wildcat strikes and put their faith in self-organization rather than a demagogue.