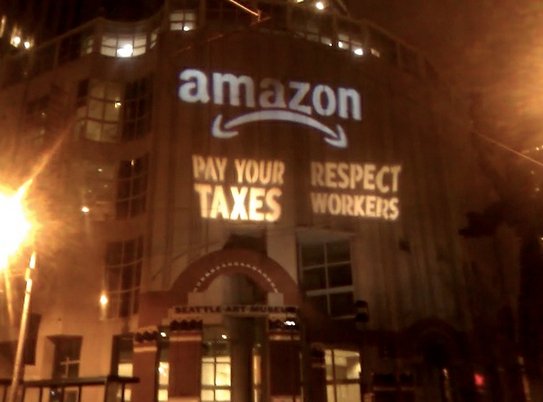 Like many others in Trump’s America, big business seems to be confused on where it stands. One minute it is receiving its dream list of tax cuts and regulatory rollbacks, the next minute it is being attacked by the president for real or imaginary transgressions.

Trump’s corporate villain du jour is Amazon.com, which he has criticized for supposed offenses such as cheating the U.S. Postal Service. As with Trump’s other Twitter tirades, any grain of truth in his position is overwhelmed by a torrent of incoherent and misdirected accusations and insults.

Amazon certainly has a lot to answer for. The online behemoth has gone a long way in supplanting Walmart as the country’s most controversial retailer. The labor practices in its distribution centers are horrendous. It is decimating small business. Most recently, it is conducting a competition among 20 localities for a second headquarters campus that will supposedly create 50,000 jobs, signaling that it expects a giant subsidy package from the winner. Some places are ponying up offers in the billions, setting the stage for a future fiscal disaster.

Trump has focused on none of these issues in his tweetstorms against Amazon. He did mention the issue of sales tax collection, though his critique was out of date. After years of refusing to collect taxes in most parts of the country, Amazon has made agreements with state governments yet is still not collecting the local component in many places and is not requiring the third-party vendors that use its website to add taxes on their sales.

It is unclear whether Trump’s complaint about Amazon’s arrangement with the Postal Service has any validity, given that the terms are confidential. What seems to be inaccurate is the claim that the USPS is losing money on the packages its delivers for Amazon, which is enabling the post office to make use of excess capacity.

The problem is that Trump’s sloppy criticism is prompting many people to jump to the defense of Amazon, which doesn’t deserve all the support. The Washington Post, separately owned by Amazon CEO Jeff Bezos and probably the real target of Trump’s wrath, should be defended for its critical reporting on a corrupt administration. Yet even if Trump is incapable of making the distinction, others should not feel that rising to protect the free press requires one to also take the side of a corporate cousin involved in very different activities.

The Amazon situation is a symptom of a larger problem. Trump’s potshots against various companies amount to fake corporate campaigns that may be making it more difficult for real campaigners to get their message across — in the same way that Trump’s ham-fisted tariffs are complicating things for legitimate fair trade activists. To the extent that his fake criticisms engender pro-corporate responses, Trump could end up strengthening the position of big business.

If Trump were smarter, one might think that was his intention all along.  More likely, it just another aspect of the chaos in which we must now live.