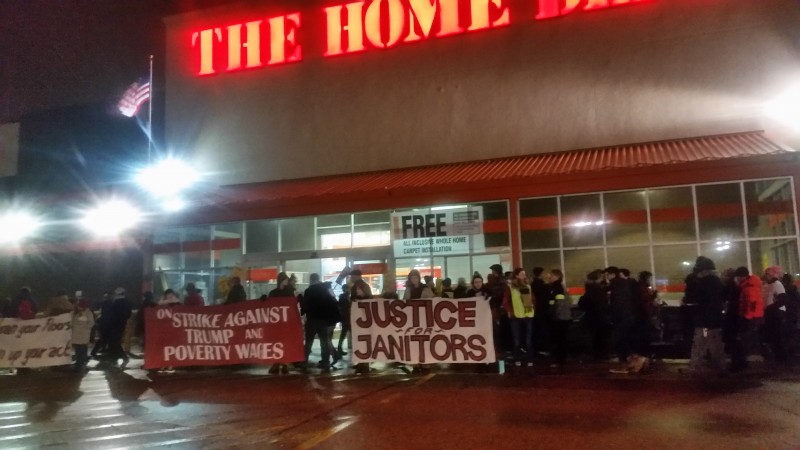 Home Depot is the latest company to join the bonus bandwagon, announcing that it will give hourly employees one-time payments of up to $1,000 as a “reward to our associates for continuing to deliver outstanding customer service.” CEO Craig Menear added: “This incremental investment in our associates was made possible by the new tax reform bill.”

No one should begrudge a few more bucks to underpaid retail workers, but the bonuses should be regarded with a skeptical eye. It’s clear, to begin with, that the companies making these announcements are doing so to curry favor with the Trump Administration and Congressional Republicans. And the amounts being offered to employees represent a small portion of the financial benefits the corporations will enjoy from the tax giveaway. At Bank of America that portion was reported to be about 5 percent.

There’s also a problem with the way the payments are being made. The fact that many of the workers are being given one-time bonuses rather than increases in their base pay means that the impact will be fleeting and do little to address the ongoing problem of wage stagnation.

But perhaps worst of all is that employers are taking these steps on their own rather than negotiating with their workers. That’s possible because they are in almost all cases non-union. Some such as Walmart have a notorious history of anti-union animus, while others like Starbucks have resisted organizing drives in more subtle ways.

There are a few exceptions. For example, AT&T, which is extensively unionized, discussed its bonuses with the Communications Workers of America before making the announcement. Nonetheless, the CWA, which had called on telecommunications companies to provide the $4,000 wage increase Republicans claimed would result from the tax bill, vowed to negotiate for more than the $1,000 payments AT&T said it would provide.

While AT&T maneuvered to downplay the role of the CWA, most of the bonus givers need not take such steps. They can present their payments purely as an act of corporate benevolence.

They are also an affirmation of the lop-sided balance of power in non-union companies. Management gets to decide whether and how to share the tax windfall in the same way it makes all other decisions that affect the lives of their workers. This is seen in the fact that companies such as Walmart and Comcast announced their bonuses around the same time they were carrying out substantial layoffs.

Large companies are adopting the Trumpian practice of pretending to act in the interest of workers without actually empowering them. If Corporate America really wanted to help their employees, they would drop their opposition to unions and let workers bargain for real gains rather than handouts.