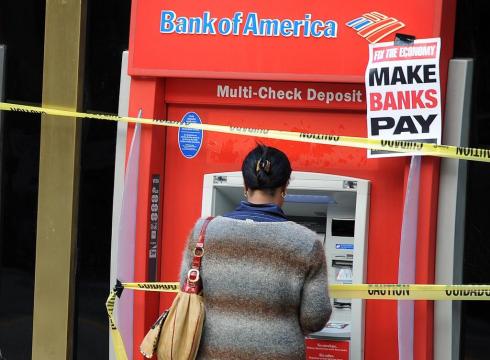 Over the past few years, the Justice Department and state prosecutors have collected tens of billions of dollars in fines and settlements from large banks in a series of cases stemming from fraudulent practices in the period leading up to the financial meltdown of 2008.

Much of the debate on these cases has focused on whether the financial penalties, pursued in lieu of criminal charges against bank executives, were the most appropriate response to widespread bank misconduct. Or else the issue was whether the penalties, especially after accounting for the fact that they were in part tax-deductible, were big enough.

The Wall Street Journal has just published a front-page story addressing yet another facet: what was done with the money, which totaled some $110 billion in cases relating to toxic mortgage-backed securities, foreclosure abuses and related issues. The largest of the cases involved nearly $17 billion from Bank of America in 2014.

Roughly half of the overall total stayed with the federal government, with little disclosure of how it is being used. It appears that most of the roughly $50 billion has simply gone into the Treasury and was comingled with other federal funds.

The Journal states: “Bank executives grumble privately about the opaque process and are critical the government didn’t ensure more money went to housing-related issues.” Opinions of the culprits should not count for much in this discussion. The fact that the Journal cites them adds to the suspicion that paper is in some way trying to discredit the feds for their handling of the cases.

That posture is more explicit when it comes to the share of the money that ended up with the states. The Journal implies there is something wrong with New York’s decision to use some of its settlement funds to replace the Tappan Zee Bridge north of New York City and to provide high-speed internet access in rural communities — or the decision of other states to direct settlement funds into state pension funds. One can disagree with the particular uses, but they are all valid public purposes.

After devoting most of the article to these imaginary scandals, the Journal finally gets to what is really the most important issue: what the banks themselves are doing with the roughly $45 billion of the total that was supposed to be devoted to consumer relief. It’s important to realize that the banks were not required to simply distribute these funds to abused customers in the form of reparations (which might have been a good idea).

Instead, the banks get credit toward the consumer relief settlement portions ($7 billion in the case of BofA) when they modify existing mortgages or make new loans to low-income consumers who lost their homes to foreclosure. In other words, they are being credited for restoring loans to more reasonable terms and thereby increasing the chances that the homeowners will avoid default. This is good for the homeowners but it also benefits the banks.

The Journal article describes the case of one homeowner who did not benefit much from her mortgage modification. On the other hand, Eric Green, the monitor of the BofA settlement has glowing words for the program in his most recent report. He says that first lien principal reductions have averaged 51 percent, that the average loan-to-value ratio has been brought down from 179 percent to 75 percent, that the average interest rate has been cut in half, and that the average monthly payment has been reduced 38 percent, or more than $600.

There may be more to the story, but this is what the Journal should be investigating rather than implying that it was a mistake to extract large sums from banks to pay for their sins.